5 Inexpensive Decorations to Modernize Your Home

A modern home has to be well-designed and cozy as well because you obviously don’t want to go into a lackluster place after a day’s of hard work. There are plenty of ways that don’t need breaking the bank or tearing down the walls to make a home look attractive. If you think your home looks dull, but you don’t have the budget for major renovations, check out these 6 ways to modernize your home without spending big bucks.

A modern home is cozy, but it also utilizes every nook and corner of a home. There should not be any unused space. If you have a formal dining area that you don’t use because your family loves to dine in the kitchen, turn the room into a cozy den for doing your crafting work or a library for reading books. If you don’t have any available room, look out if there’s any empty corner that you can turn into a home office. 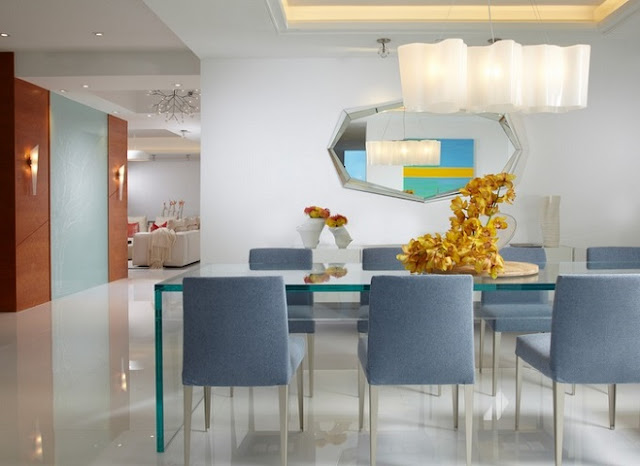 The concept of open space is really popular these, but you just can’t tear out the walls if your home doesn’t have an open floor plan. Don’t worry! You can still make your home open, airy and transform it into a cozy den that every modern home should be.

The trick of getting that look is actually pretty simple. Get rid of the bigger, bulkier furnishings, making room for more natural light to get in, and using mirrors strategically in a couple of places. In case if you want to keep one or two big furniture pieces, move them around the room to see in which positions they don't take much of the open space.

Proper lighting can breathe life into a place, and LED pot lights are one of the most popular light sources that people use to modernize their home. A grid of pot lights is able to spread light evenly over a large are and brighten those spots where wall lights can’t reach. View the ideas Model_Home_Makeover shared to make your interior renovations easy.

You can support them with a couple of pendants and floor lamps strategically placed in dark corners. Light them up and see how your dark, cramped room has instantly transformed into a lively, welcoming place. 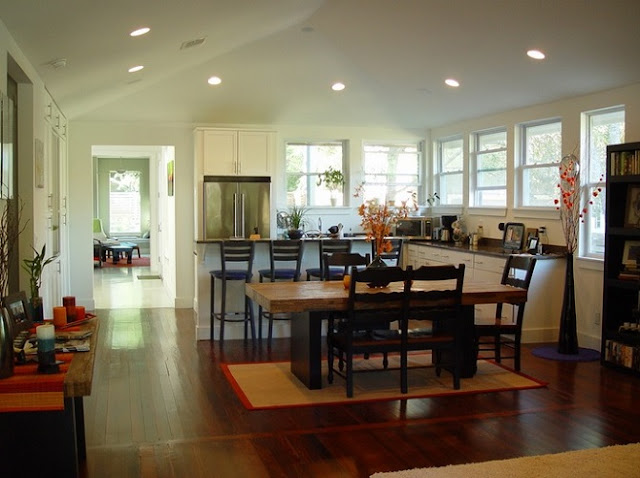 Windows seem to be the most overlooked place in a home. In most cases, homeowners leave the windows bare or install simple blinds because they can’t decide on the right style for the rooms.

Window treatments can inject massive style into a room. You can choose bamboo shades if you are a minimalist and love to be in contact with nature, go for gauzy white sheers to create a beach vibe, or install geometric patterns for making a style statement. However, the safest trick is to choose the color of the curtain panels two to three shades lighter than the color of the window frame and adjacent walls. Besides, semitransparent curtains are the best option for both privacy and not hindering natural light. 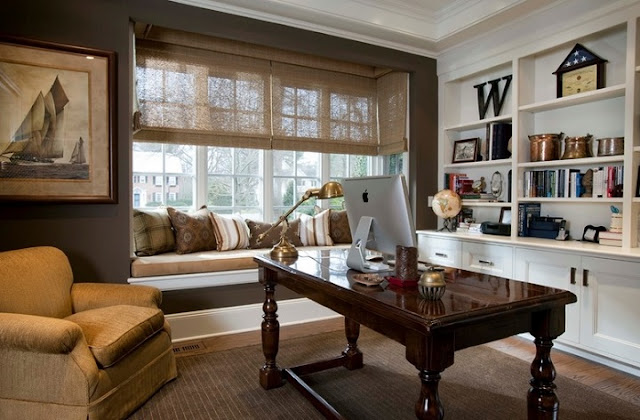 It’s a genuinely inexpensive way to update your home. Nothing dates your home more than dirty, worn, or broken handle pulls and knobs. So, choose from the plethora of options such as aged copper, bronze, stainless steel, etc. that are available in the market and give all the cabinets and doors a new look.

Don’t think too much about matching styles because you can easily bring stainless steel knobs in a country kitchen and vintage aged copper into your chic and trendy bathrooms.

A few other tricks for updating your home is to clean the clutter, giving it a fresh coat of paint, cleaning the dirty areas, installing wallpaper in a few selected spots, and more. In fact, you have a whole lot of options for sprucing up your dated home in a cost-effective way and turning it into a relaxing retreat. Just remember not to overthink about matching styles. Keep everything simple, and the result will turn out to be something magical!

Email ThisBlogThis!Share to TwitterShare to FacebookShare to Pinterest
Labels: advice from an interior designer, decorating properly in your home, designing custom homes, home decorating, more space in your home

Repairing The Top Of Your Deck

Is your deck looking old and tired? Are you thinking about changing the top boards because they are showing signs of rot and age? Have you decided that it's time to pull them up and replace them with new ones?

Be prepared that the top boards on your deck might not be the only problem that you have to have repaired once the removal of them is completed.

A lot of times when the top of a deck requires replacing their are other things that need to be repaired or replaced.

When you have the top pulled off the deck you will then be able to examine the frame closely. You will have to replace any rotten joist or beam boards with new ones.

Depending on the age of the deck and who built it you might find more then just rotten boards. Since you have taken the time to remove the top this is the time to make any modifactions to the deck structure itself. Have your contractor take a close look at he beams, the foundation, the attachment to the house, the grade and the slope of the land under the deck and also have them check to see how level the deck is as a whole.

This is the time to fix someones poor choices or workmenship. A lot of decks are built by homeowners looking to save money or by handymen that do not charge enough to do the job right, when they are done and for the first couple of years the deck looks really good, but overtime the deck starts to show its flaws.

We once removed the top off a very large deck at a clients cottage, when we did that we noticed some rotten joist that needed to be replaced,but we also noticed that the middle of the deck was lower then the rest. The main support beam was either sunken or installed originally lower. When we jacked the beam up to level it the footing tubes that it was sitting on actually fell over! The tubes had only been placed in the ground about a foot, this was the reason that the beam was low, it didn't have a proper support structure. We had to hand dig down 4 feet and install new footing tubes and fill them full of concrete. Then we were able to re-level the main beam properly with the confidence that it would stay that way once we re-installed the top of the deck.

There are other reasons to start altering the substructure of the deck, if you plan to get a hot tub and you want it where the deck. Hot tubs when they are full of water are like parking a car on your deck, that's a lot of weight. You will have to either build a sub structure that is extremely strong or you will have to remove the deck substructure in that area and pour a concrete pad for it to sit on.

Building in seating or a privacy fence is another reason to alter the substructure, anchoring these in the frame are the best way to ensure that they stay strong and straight for the decks lifetime.

Whatever you decide to do make sure that you budget in a contingency into your deck re-topping for repairs as on older deck there bound to happen.

The best way to get your deck fixed so that it lasts as long as it should is to have it fixed by a professional, call a contractor and have them fix it right.

Email Village Builders at info@villagebuilders.ca and lets get your deck fixed the right way.

What To Do With Those Trees Around The Cottage

Did you buy an old cottage and your wondering what to do to create more space on the property because the older trees on the property are so overgrown that they take up all the lawn space and completely block the sun?

There are many reasons to cut trees down, don't think that you are being evil, eventually all trees on your property will have to be cut down, nothing lives forever, if they aren't cut down they will eventually fall down.

Here are some of the reasons to cut down tree's at the cottage;

Just because you cut some trees down at your cottage doesn't mean that you have to clear cut your lot, in fact you can have trees removed and then have new smaller younger ones planted in their place. You then get to watch a new young tree grow and you get the benefits of the space that it doesn't take up. When you plant native evergreens they don't take long to grow and as they grow they give wonderful privacy, where older taller trees usually have thinned on the bottom and don't give the privacy that you are looking for.

You can also plant native hardwoods, they will take a long time to grow but they are beautiful to look at and give nice shade without taking over a lot of room at ground level.

Bottom line. don't be afraid to CUT THOSE TREES!

Were To Get Your Plans For An Addition?

What do you need to build an addition? A set of plans and a contractor.

How do you do those two things? Call the right contractor!

Find the right contractor that can build your addition and they should be able to help you get the plans drawn for you.

It doesn't mean that the contractor will draw them for you, but it does mean that good quality contractors that do a lot of additions regularly work with a select group of draftsmen, designers and architects. This streamlines the process, allowing the contractor to help direct the creation of the plans, so that they coincide with your budget and not just your vision for the space.

The process from getting drawings to getting a proper budget to then getting a contract signed with your contractor usually takes months, that's why finding a contractor that can help you with the drawings is a great thing because it will help cut that time down to a minimum.

Each person or company that create drawings offer a different level of service, different design style, different build style and of course a different price point. Your contractor will be able to determine which one you will need after discussing it with you and getting some answers on style and budget.

Most contractors that are good at what they do, have been around in the industry for any length of time and have a good reputation will have a stable of people and companies that they can recommend to you for your drawings. If they don't then you should consider that a red flag.

If you are wanting to build an addition and you need drawings and a contractor send us an email at info@villagebuilders.ca or call us at 705-466-3202, we'd be glad to help.